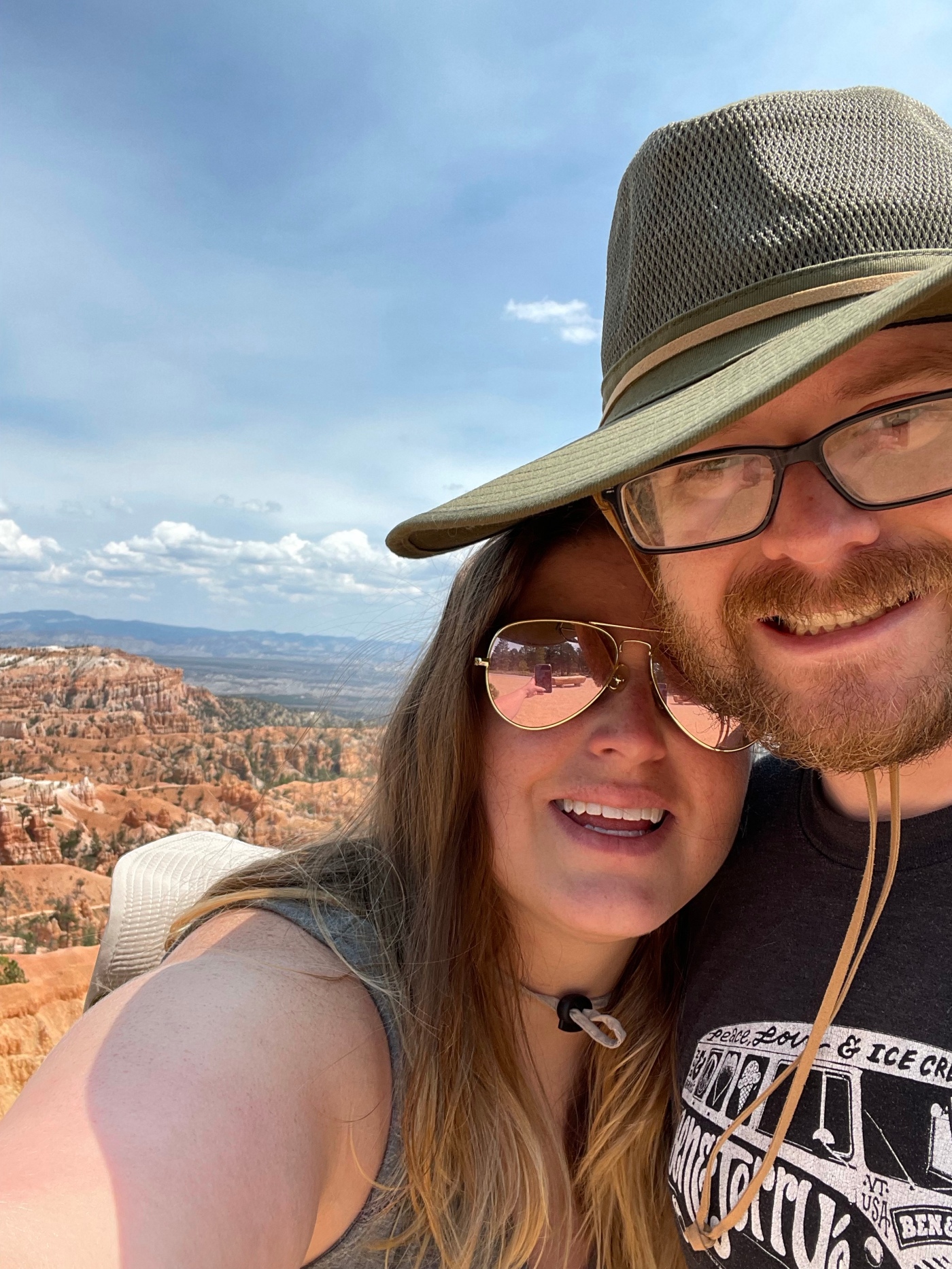 Having officially hit the halfway point for our trip, and only being a day away from the big Dirty 30 itself, it was time for a surprise. And by surprise, I mean Russ’s best friend flying out and showing up at our hotel room (after having made Russ stay cooped up in the hotel all day while I made up excuses as to why we couldn’t go out and do anything yet).

We spent our seventh day relaxing and sleeping in. I spent a good chunk of the first half of the day lounging at the pool, much to Russ’s displeasure since he wanted to get out and do something. But, unbeknownst to him, I was stalling until his best friend landed and arrived at our hotel to surprise him for his birthday.

After the initial shock of Brandon’s arrival wore off, we explored the strip and grabbed dinner at the Bacchanal Buffet located in Caesars Palace. Just the same as our last time in Vegas, we left the buffet STUFFED and satisfied. We walked the strip some more to help settle our overly stuffed tummies before walking to the MGM Grand to see David Copperfield’s show. Drinks are expensive, but the show itself was a fun watch. You’ll even get to participate in the show if you’re seated in the front row. I still can’t decide if I’m bummed that we were one row too far to be called on or not.

It was finally Russ’s actual birthday and we had it jam packed with adventures from the Mandalay Bay Aquarium to Go Karting at the Gene Woods Racing Experience at the Sunset location (thanks Groupon). The aquarium was a lot of fun, especially the tunnel where the fish swam literally over top of you. It was the first time we had gone to an aquarium in a really long time, so it was an especially fun event.

After the aquarium we grabbed a quick Lyft to the Gene Woods Racing Experience on Sunset Road. Having not gone go karting since I was a kid, I found it to be a blast. The three of us zipped around the track, racing one another until our time was out.

We didn’t have anything specific planned for dinner, so we went to Ocean’s sister restaurant in the Miracle Mile, Flights. The food was pretty good, but the service was lack luster with the waitress ignoring our table and only taking orders from one person at a time and not giving the others at the table the chance to place their order before she would disappear. This meant one person would get their drink while the next placed their order, and then their food would come and the next person was finally able to place their dinner order and so the firs person’s food was cold by the time the next order came out, and so on. The dinning experience definitely put a damper on the evening, but with just over two more days left of vacation, we were able to enjoy a few other restaurants in Vegas.

Day nine was another early morning as we made our mad dash to another meeting place to catch a bus for our tour of Bryce and Zion National Parks. The first park we stopped at was Zion National Park in Utah. Zion was beautiful, but didn’t come close to the sheer awe-inspiring view the Grand Canyon possessed. While exploring Zion, we ran into a rather friendly deer who was lazily grazing across the sidewalk directly outside of the gift shop.

After Zion, we hopped back on the bus to head to Bryce Canyon National Park. The drive was beautiful with enormous mountains towering in the distance as we got closer and closer to the canyon. We arrived at Bryce Canyon National Park around 2PM. Though not quite as spectacular as the Grand Canyon, it was a close second. We had enough time at Bryce to do a mini hike before heading back to the bus and heading back to the strip. It was windy, but a pleasant day for a hike. After an exhausting day exploring, we finally made it back to our hotel for a movie night.

Our tenth day in Vegas was bitter sweet since it was our last fully day of vacation, which meant we had to start cleaning up. After sleeping in, we headed back to Gordon Ramsay Burger for lunch since we couldn’t let Brandon leave Vegas without having experienced one of Gordon Ramsay’s restaurants – and I was seriously craving that burger. We explored Caesar’s Palace after lunch before heading back to the Miracle Mile and stopping in at the Tipsy Robot for some drinks. It was definitely a cool experience having a robot make my order and the drinks were good, but they were also pretty pricey.

Being our last night in Vegas meant it was time to party and gamble. We pulled out the carefully set aside cash and headed to Planet Hollywood for a while before walking to the Golden Nugget to gamble and grab dinner before going for round two at Planet Hollywood. I’m not sure if it’s from the alcohol had while gambling or they were really just that good, but the chicken tenders I had for dinner were some of the best chicken tenders I’ve had and definitely hit the spot.

Russ wound up winning some money while gambling, but, unfortunately, I wasn’t as lucky. For a more relaxed atmosphere, with supposedly better odds, The Golden Nugget is a good place to go for casino night and came highly recommended by one of our tour guides.

Always the worst day of any trip, the day we went home and back to reality. After packing up, we grabbed a Lyft back to the airport for our final goodbye before hitting the airline lounge while we waited for our flights home. Until next time, Vegas!

Make sure to keep an eye out for our next blog series all about our WEDDING! Seriously, the best day of our lives so far!

Sign up for our email list today and never miss out on new posts or special offers!

Thank you, m’am. I am deeply grateful to have attended The Queen’s Platinum Jubilee. 🇬🇧 Queen Elizabeth II was truly a remarkable woman. Rest easy Your Majesty. 👸🏻#queenelizabeth #thankyoumam
London was fabulous and it still feels like a dream that we got to take such an impromptu trip and for such a momentous occasion. 🇬🇧
England 🇬🇧 with my beautiful momma for a *very* belated birthday trip (thanks Covid 🙄) was absolutely amazing! Especially since we got to go spontaneously for HM Queen Elizabeth II’s Platinum Jubilee. 👸🏻 We had so much fun, made some incredible memories, and drank lots of tea! 🫖 Checkout my story and my sister account (@dreamers_onthego) to see@more from our trip over the next couple of weeks! ✈️
Looking for an editor? Let’s chat before my editing sale ends on 15 May 2022! 📚 looking for an added 10% off on top of the sale discount? Follow me on Twitter (@LindseyRBarnes), like my editing sale tweet, and RT. 🎉
We did a thing and now I’ve upgraded to wifey status! 👰🏻🤵🏼 Monday was the best day ever! I couldn’t have asked for a more perfect day. I got to marry my best friend and forever Valentine surrounded by the people who love us the most! 💕 Only three more days until my HUSBAND and I leave for our honeymoon in Jamaica! 🏝
I am shocked and saddened to learn of the on campus shooting and subsequent death of two Bridgewater College officers today. Bridgewater College was my home away from home for four years, and those four years were some of the best years I have had. I look back fondly on my time at Bridgewater and all the many friendships I made. I am devastated that such a tragedy has touched such a remarkable place. Officers Painter and Johnson gave their lives protecting the students of Bridgewater College and are heroes. Rest easy and sore high. 🦅 Once an Eagle, always an Eagle ❤️💛 #BridgewaterStrong